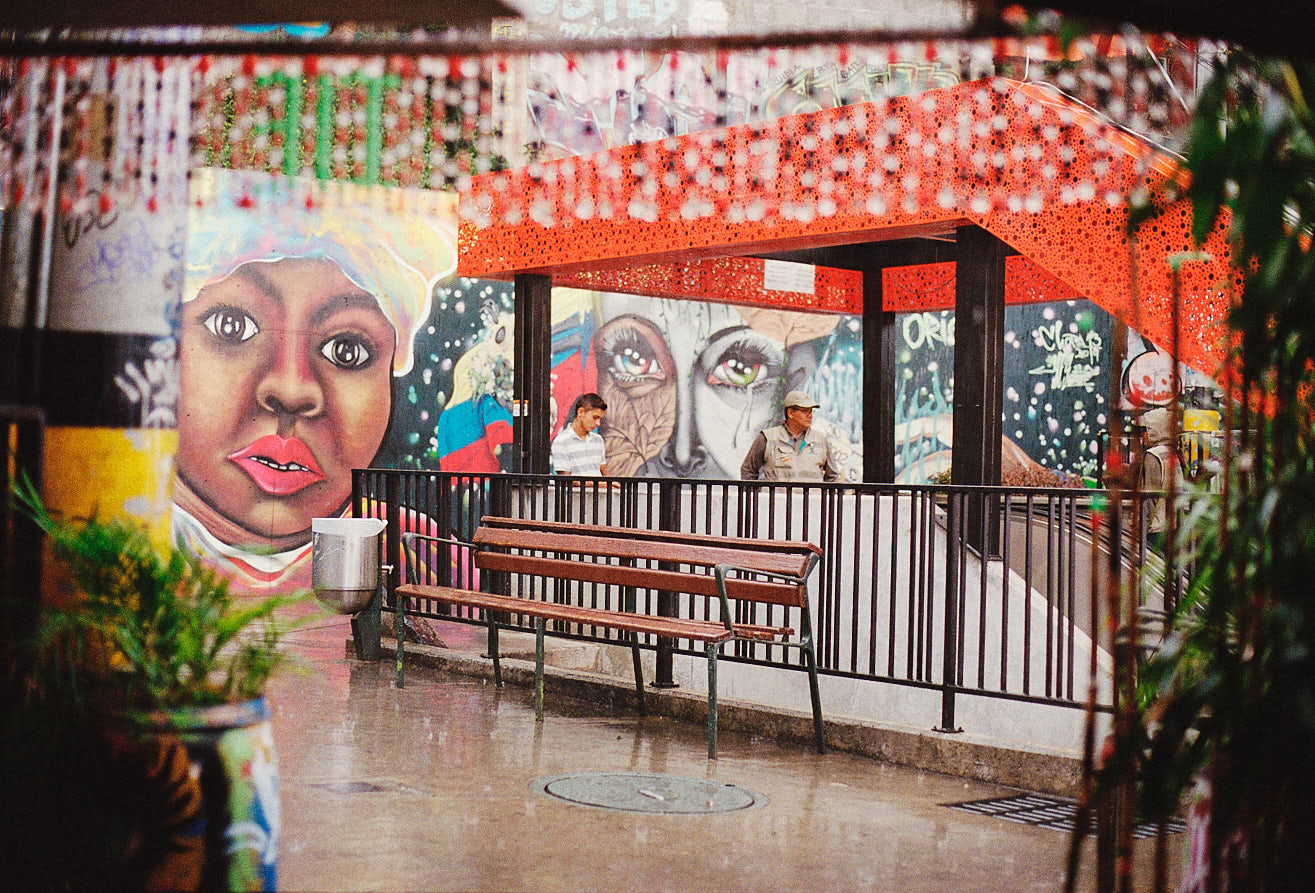 Colombia – a country that I had been phantasizing for at least two decades to visit. When the time finally arrived, the decision had to be made on which cameras and lenses to bring. In a mood to capture the essence of the place in an emotional way rather than in pretty pictures, I decided to bring my 1979 Minolta XD-7 together with the Minolta MD Rokkor 50mm f/1.4 lens which should make for an interesting combo for street scenes. The focal length of 50mm proves to be both challenging and rewarding with its slightly restricted field of view.

Once having arrived in Medellín, Comuna 13 was an obvious place to explore. At the beginning of the 2000s, the infamous neighbourhood was like the last village in Goszinny’s and Uderzo’s Gaul, the last point of resistance for the Guerrilla fighters against president Uribe’s paramilitaries. The conflict escalated and basically ended with Operación Orión, a bloody and brutal invasion of Comuna 13 where more than 2,000 military troops together with helicopter support entered the neighbourhood and started indiscriminate killing until the steep streets were slick with blood.  The bodies are said to be buried in nameless graves in the mountains behind the Comuna.

Shooting with Kodak Ektar 100 film helped enhance the prevalent brick-red and reddish-brown hues which provide a striking contrast to the painted sturated green tones of the murals.

Education or the quest for learning is the single most important building block of a successful community. Transformation can only be realized by increasing knowledge and wisdom throughout all strata of society. Lack of knowledge – ignorance – leads to conflict and ultimately, violence; this is the reason why the “virtue” of ignorance is propagated by both totalitarian and anarchistic bodies of rulership.

The people of Medellín have realized that through bitter experience. Hope is a prevailing topic in the murals which adorn the brick and mortar walls of the Comuna. The colour green dominates the visuals, symbolising peace and equanimity.

Speaking to my local guide, she told me haunting stories about how she was forced to flee from the village when she was a child, of random violence and viscious murder. A life in the big city seemed preferable. At least there was some sense of mutual protection, if only through syndicate control. What was not to be found was happiness and freedom. The tight confines of the Comuna do not allow for any amount of privacy. A love story unfolding? Only with utmost care and secrecy. Pursuits of individuality? Not welcome. Expression your opinion? Dangerous.

But life needs to be lived, so the freshly baked city dwellers made the best out of it.

Music – especially rap freestyle music – plays an essential role for adolescent expression. Freestyle sessions are frequent, with gangs of locals performing to the booming sound of portable loudspeakers. What they lack in musical quality, they certainly make up for in enthusiasm.

Using the fully manual focusing of the Minolta XD-7 may seem dauting but actually the process sharpens your feeling for distance. Especially for street photography with its short reaction times and moving subjects, a good strategy is to take a peek at the lens markings for disctance and preset the ring to a the value at which you expect your subject to be at the moment you press the shutter. Shooting with open apertures during low light conditions, the focal plane narrows dramatically, making it a real challenge to deliver images in focus.

When it is raining, it is raining hard. During the trip to the Comuna, suddenly the skies darkened, and within minutes, heavy rain began to fall drumming incessantly on the corrugated iron makeshift roof under which we were taking shelter. In the mere hour during which we were trapped, an astonishing six litres of water per square meter hit the ground and flowed in torrential streams down the steep alleyways.

Switching to Kodak Portra 400 helped to compensate for the lower amount of visible light during and after the rain due to its higher ISO value of 400. This allowed shooting at narrower apertures in order to bring more objects into focus.

Framing – or multiple framing – is a technique which lends itself well to keeping the viewer in the picture, as in the image below which was shot during the heavy downpour using the entrance to a roofed walkway as an outer frame and the red roofed escalator structure as an inner frame to keep the focus on the persons and the larger-than-life face murals.

In terms of development, the city government had the ingenious idea to install escalators to help the young and elderly in coming down and getting back up the crammed hillside, to save time and energy when commuting, shopping, or getting to school.

Although not everything is as rosy as it is sold to the tourists which are coming to marvel at the murals and to taste the Michelada – beer mixed with fresh lemon juice, green mango slices and salt on the rim of the glass – an acquired taste – still matters are improving for the folk living in Comuna 13, a process which will hopefully continue into the next generations.